The Berejiklian- Barilaro Government has given the boss of its wholly-owned Essential Energy a massive pay increase of $117,723.

This comes at a time when households and small businesses are suffering from record high electricity bills.

Essential Energy is 100 per cent-owned by the NSW Government and distributes electricity to 800,000 customers across regional New South Wales.

The massive 15 per cent pay hike is out of step with the movement of wages and salaries across the economies – which are almost stagnant.

It is also breaches the Government’s own 2.5 per cent wages cap which applies to teachers, nurses, police, ambulance officers and all other public servants.

Essential Energy has spent the last two years fighting an expensive legal action against the independent price regulator which wanted to cut prices.

“Giving a huge pay rise to an executive who has slashed the workforce and presided over rising prices for people doing it tough in the bush, is out of step with community expectations.

“This week it is revealed that they have given an electricity boss a massive pay increase. This is further proof that the Nationals have completely lost touch with the people they claim to represent.” 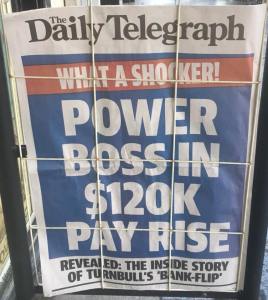