NSW Labor has announced sweeping plans to re-shape the industrial relations landscape to ensure people who work in the gig economy have minimum pay and safe working conditions.

In the ‘gig’ or new economy, workers get work through platforms or networks such as Uber or Air Tasker, but they do not have legal protections. This means they miss out on sick leave, superannuation and holiday pay.

A quarter of a century ago just one in ten Australians was employed part-time; now it is one in three, and Australia ranks behind only Switzerland and the Netherlands in having the highest proportion of part-time workers.

Labor will have a list of existing networks which can be added to the list so the independent umpire can make orders for new and emerging business models.

Labor will also ensure gig workers are legally entitled to workers’ compensation when injured and that the company using their services pay their fair share in insurance premiums.

Mr Searle said there will be a fast and inexpensive mechanism to resolve disputes around pay and conditions for gig workers.

It will be similar to a measure Labor created and put into s20 of the Entertainment Industry Act 2013 for musicians and others performers – the original ‘gig’ workers.

“Everyone deserves to be paid a fair day’s wage for a fair day’s work and to be able to take holidays with family and get sick pay when they are ill and unable to work.

“As it stands workers in the gig economy are effectively stranded without protection. That needs to change and will do under a Labor government.

“These workers are on the margins of our economy – only Labor will give them certainty about their pay and conditions.

“A Labor government will step in and give this growing body of workers the right to be treated like any other employee in the workforce. It is the right thing to do.”

Quotes attributable to Leader of the Opposition in the Legislative Council and Shadow for Industrial Relations Adam Searle:

“A growing number of people are working in arrangements where they do not get these benefits of fair pay, holidays and sick pay.  Under the changes we make to the legislation they will.

“Just as ‘big data’ is shaping our social interactions it is also influencing the world of work. That will continue.

“Labor will come up with laws that protect workers immediately – and which is flexible for any forms of work that emerge in the future.” 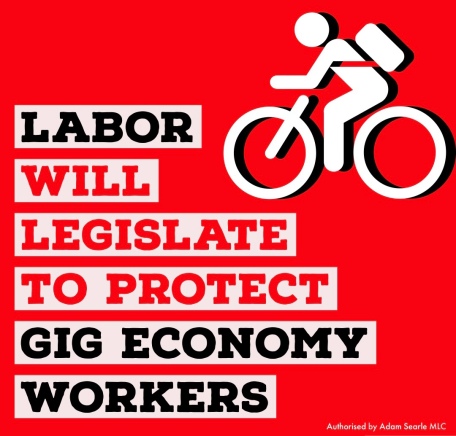